UL’s Robotics Tester is Always Learning on the Job 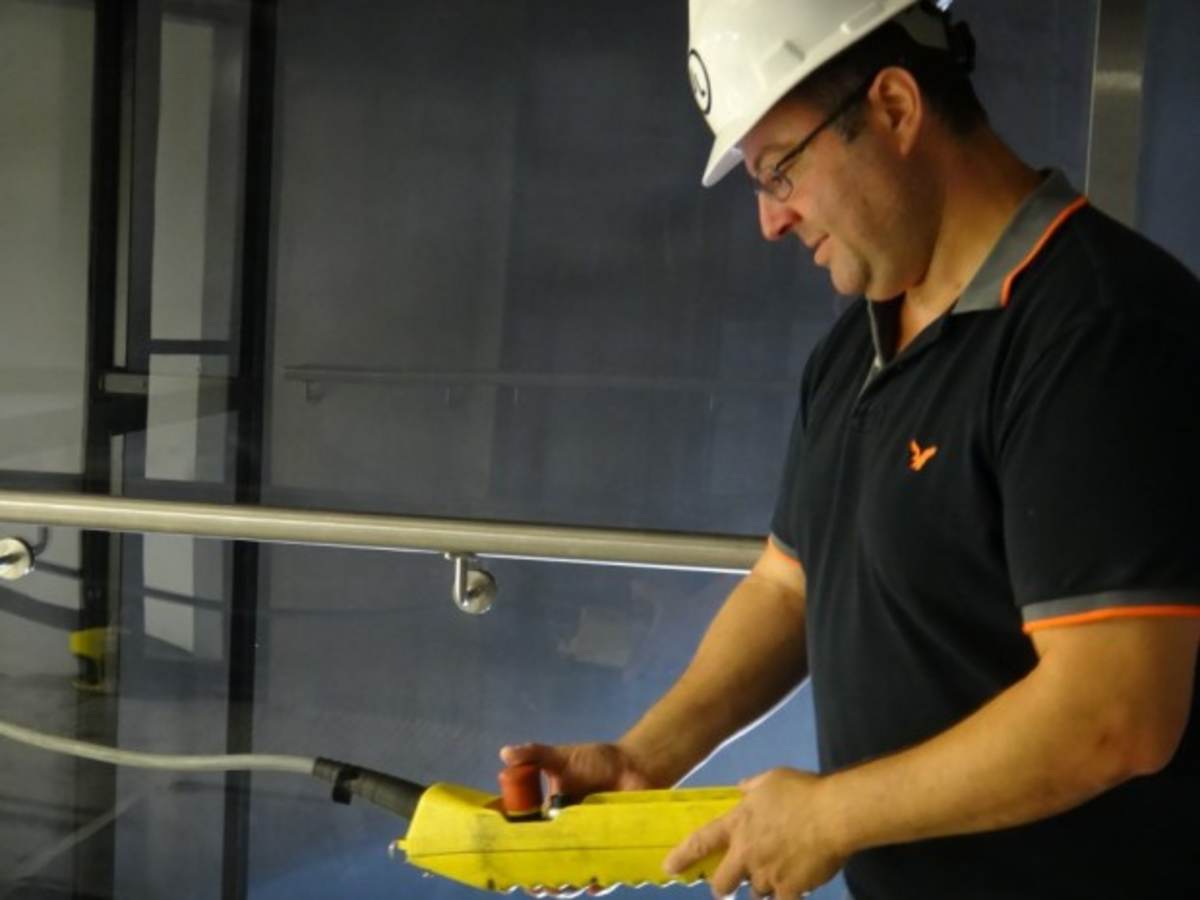 Even if UL’s robotics staff engineer Dan Posner isn’t at his Wantagh, N.Y., home, he still might answer when you ring the doorbell.

Dan has his doorbell connected to his phone. When the doorbell rings, he can speak into the phone and have his voice transmitted to a speaker at the door.

Dan is a 15-year employee at UL’s Melville, N.Y. facility, and the go-to guy when a manufacturer has a new robot to evaluate and test. To his wife and two young sons, Dan is the gadget guy.

“I like playing with stuff around the house,” Posner said. “(My sons) know their father works with robots. To them, it may seem like a lot of dads do that.”

Dan Posner said his interest in gadgets and electricity was sparked through his uncle’s employment at Commodore after immigrating to Canada from Tunisia.

“They owned business machine stores so I was around that a lot,” he said. “I was always around electromechanical things.”

Among his favorite toys were Radio Shack circuit sets — kits that allowed you to construct low-power electric circuits. Dan moved from this to taking apart home record players and telephones. By age 9, he was figuring out how to connect phone lines to every room of his Levittown, N.Y. home.

Yet, after graduating high school, Dan first followed his younger brother and studied physical therapy at New Jersey’s Kean University. He switched to the school’s engineering technology and management program after a friend got him a part-time job in production and on-air at a radio station, WDRE. This station, based in New York, was expanding into Philadelphia (and other cities) and upon graduation, Dan would join full-time to run the technical part of the station.

But the station was sold in 1996, and Dan’s radio career ended before it had really started. He enrolled at Stony Brook University and turned to his first love, electrical engineering.

At Stony Brook, Dan focused on getting an education and building a resume. He took internships at Canon and Northrup Grumman. He became president of the school’s Institute of Electrical and Electronics Engineers chapter, and secretary of the school’s National Society of Professional Engineers. He joined Tau Kappa Epsilon and became its president.

Dan also joined the Society of Automotive Engineers Robotics Team. He wasn’t particularly interested in robots, but he thought, how could it hurt?

Following a winter job fair before his spring 2001 graduation, UL representatives called Dan with a job offer. UL, he thought, would be a great start en route to eventual employment at Panasonic or Sony.

What interested UL, however, was his Robotics Team membership — the safety science company had an opening for an engineer who had an interest in robotics. That was 15 years ago, and Dan is still the person that sees nearly every robot UL evaluates.

Movie depictions of robots are commonplace, beginning in 1927’s “Metropolis” and continuing to today’s computer-animation creations such as “Transformers.” In the real world, robots aren’t protecting or overthrowing civilization. In science labs and factories throughout the world, they are becoming an indispensable part of it.

“Generally speaking, a robot has three or more axes of motion, is intelligent and is reprogrammable.” So, even a huge industrial mass-production machine isn’t really a robot, he said, unless it can be programmed to do different tasks.

The first robot Dan reviewed for UL handled liquid chemicals used for DNA sequencing at the Massachusetts Institute of Technology’s Whitehead Institute. The machine took a cancer cell, mixed it with a compound and sounded an alert when there was a significant change was detected. UL’s purpose was to evaluate the safety of the robot — the electrical connections, the shock hazards and the protection it offered from accidental human contact and injury.

The MIT work introduced him to what would be a constant feature of his job — travel. Dan said robots tend to be large, and sometimes made-to-order, one-of-a-kind creations, so it’s often impractical to bring a robot into the UL’s labs for testing.

So Dan is often on the road (more accurately, in the air), and when he travels, he frequently goes to where the robots are made. In Asia, this means frequent trips to the Kyoto/Osaka/Kobe metro region or Shanghai. More often, he goes to Europe, particularly Sweden, Germany, France and Italy.

One would think after 15 years, Dan pretty much knows what he’s going to find when he gets a new robot to check out. But Dan said he is constantly learning from robot manufacturers, constantly seeing robots being used to solve problems he wasn’t aware existed.

What Dan loves about his job is the learning experience. He gets to go to clients and they teach him about the technologies they are implementing. He is always learning about the cutting edge and the clients are constantly exposing him to the latest and greatest.