The Mystery Behind "the Chemist in the Center"

A 1920s photograph of an unnamed female chemist led historical archivist Rachel Madden on a quest to discover the woman's identity. 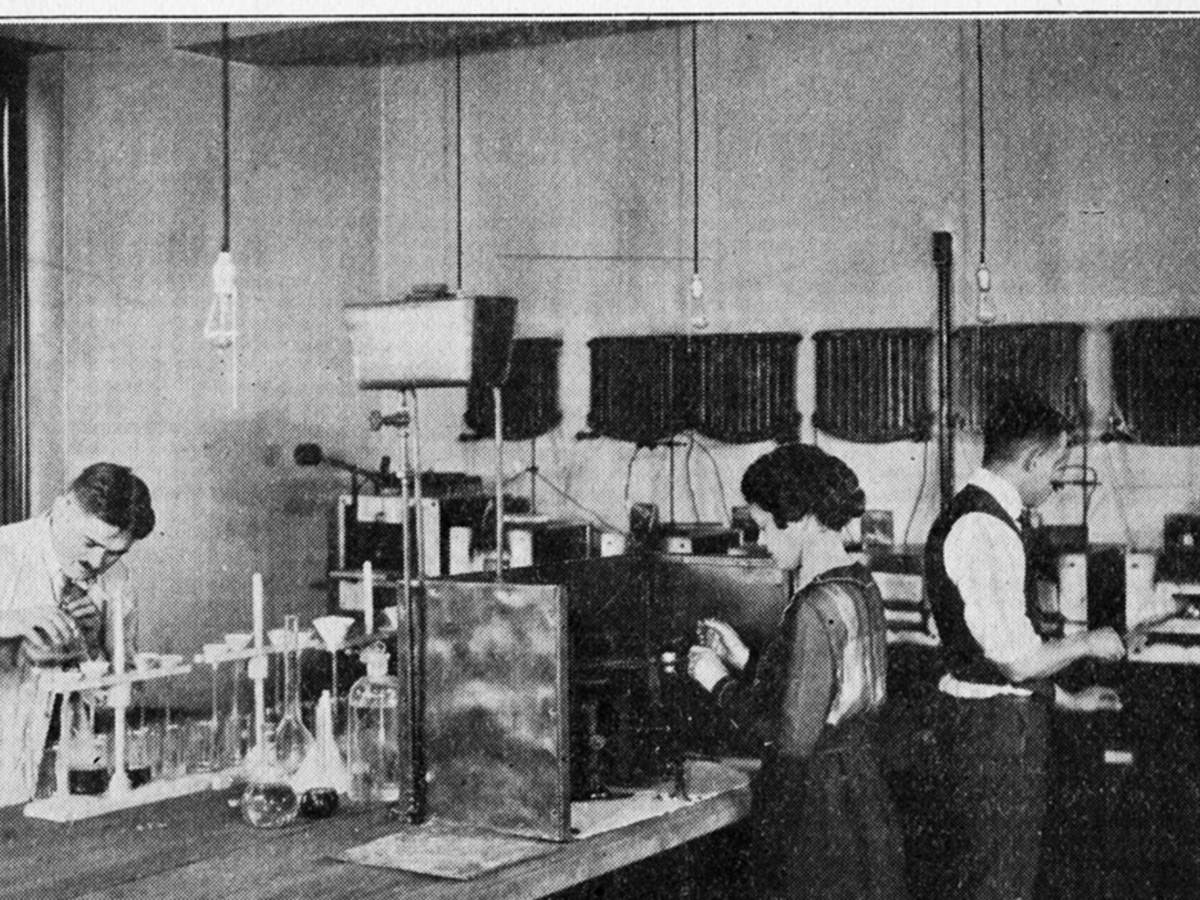 The woman in the photograph appears to be pouring a substance from her right hand into a crucible in her left hand. She is wearing a long dark skirt with a stylish sheer blouse, and shiny patent leather shoes peek out at the bottom of the photo. Her hair is swept back in an elegant up-do. In the caption, she is referred to as simply “the chemist in the center.”

Her name is Louise Logie, and she was the first female scientist to be photographed doing lab work at UL.

For quite some time, Louise’s lack of identification in this photo went quietly unnoticed. UL published its corporate history book, Engineering Progress, in early 2017, and the Archives team was highly involved in the process of putting the book together. We provided photographs, fact-checking and access to historical materials. This particular picture was an easy shoo-in for the book. It appears in Chapter Three, which is dedicated to the Roaring Twenties and discusses the social changes of the era, one of which included the widespread introduction of women into the workforce. An image of a female chemist conducting a fusion in a silver crucible to determine the percentage of sulphur in rubber was the perfect representation of the topic at hand.

I didn’t think much more about it until I read an interesting New York Times article a few months ago about a photograph from 1971. Author Candace Jean Andersen wanted to write a picture book about the Marine Protection Act of 1972, and in her research, she came across a photograph of 37 men and one woman at a whale biology conference. The men in the photo were all identified; the woman was not. Andersen went on a quest to find out who the mystery woman was. (She turned out to be retired biologist Sheila Minor Huff, who worked for the U.S. Department of the Interior on many different wildlife and environmental projects over the course of her career.)

I decided that I wanted to figure out the story of the UL chemist.

Of course, this was no easy feat, as many archivists can probably attest, women are generally more difficult to track down than men. This is because women are far more likely than men are to change their last names throughout their lives.

I first turned to the old company newsletter, Laboratories’ Data, which ran from 1915-1931. It offers a warm, gossipy look inside the organization and includes a variety of wedding and birth announcements, employee profiles and the latest science news.

The photograph accompanies an article about a new “demerit schedule plan” for manufacturers in the rubber-covered wire and cable industry. There is no further context about the employees of the Chemistry Department; the photo appears merely to illustrate UL chemists working with rubber compounds as discussed in the article.

I tried skimming through a few other issues and looking at the photographs, but there are many pictures of women throughout Laboratories’ Data, and none of them are chemists. Of course, these other women – mostly executive assistants and stenographers – were also making history in their own way. Women comprised 18.9 percent of the workforce in 1890, but by 1920 this number had risen to 23.7 percent. Every woman who worked at UL in 1920 was a part of this movement.

Finally, I simply began reading the personnel announcements in Laboratories’ Data. I focused on the year 1920, and quickly alighted upon this blurb from February of 1920:

I immediately began researching Louise Logie, and I learned that she had graduated from Northwestern University with a science degree in 1919. My colleague and I took a visit to Northwestern’s Archives, where we learned that Louise’s last name became ‘Wahlman’ after she married in 1923. She was apparently inspired to pursue chemistry at Northwestern by her professor, Dr. Ward V. Evans. Later in her career, she worked at Texaco as an analytical chemist.

According to a later mention in Laboratories’ Data, Ms. Logie left UL shortly after she arrived. In the fall of 1920, she took a position as a chemistry professor at the Oxford College for Women in Ohio, where she taught for two years. The Oxford College for Women was later absorbed by Miami University. Miami University’s Special Collections and Archives sent me the following picture:

Of course, it is impossible to say with 100 percent certainty that the woman in our photograph is Louise Logie. The approximate timeline is right, and the face shape and hairstyle seem very similar. Still, I wanted to rule out the possibility that it was another chemist altogether. During this research process, a surprising thought had occurred to me: if there was one female chemist at UL in 1920, maybe there were other female chemists in 1920.

I returned to the personnel announcements and, sure enough, the names were there. Helen Sellmer joined the Chemistry Department in July of 1920, and Genevieve Davidson started in September or October of 1920. Ruth M. Custer most likely joined in 1920 as well.

None of them looked like Louise, but their stories were all similar to hers – they all graduated with science degrees, joined the Chemical Department at UL in the early 1920s and left soon after that. Ms. Custer became a domestic science teacher in the fall of 1920. Ms. Sellmer took a job at the Orange Crush Co. factory in 1921. Ms. Davidson simply fell off the company radar at some point, although later documents suggest that she was living in Greenville, Illinois with her husband. Perhaps she quit working after her wedding, as many women did during this era. According to census data, only nine percent of married women worked in 1920.

Did these women leave UL because they were looking for other opportunities, or did they go because they felt unwelcome in the professional world of STEM? It is easy to see that the odds were stacked against female chemists from the get-go. For example, the following commentary about Ruth Custer appears in the 1920 Purdue yearbook:

"Ruthie says that she expects to be juggling test tubes in a chemistry ‘lab’ five years hence, but we rather doubt it.”

Clearly, the cultural attitudes of the time did not view women as serious career scientists. Unfortunately, there is a lot that we will never know about how the lives of the UL chemists turned out – or about Louise’s photograph, for that matter.

In a way, it’s reassuring that Ms. Logie isn’t named or singled out in the photo – she is just an anonymous chemist, the exact same as her two male coworkers. But at the same time, only about 5.2 percent of chemists were female in 1920, and UL’s female chemists deserve to have their story recognized. These women – Louise, Genevieve, Helen, Ruth – opened a door at UL. And although none of them stayed long, they left that door open behind them when they departed.

Rachel Madden, a historical archivist for UL, researched and wrote this story for UL.