Fire prevention has always been at the heart of UL’s work, even before Fire Prevention Week became an official observance in 1925. A look back at UL's role in fire safety. 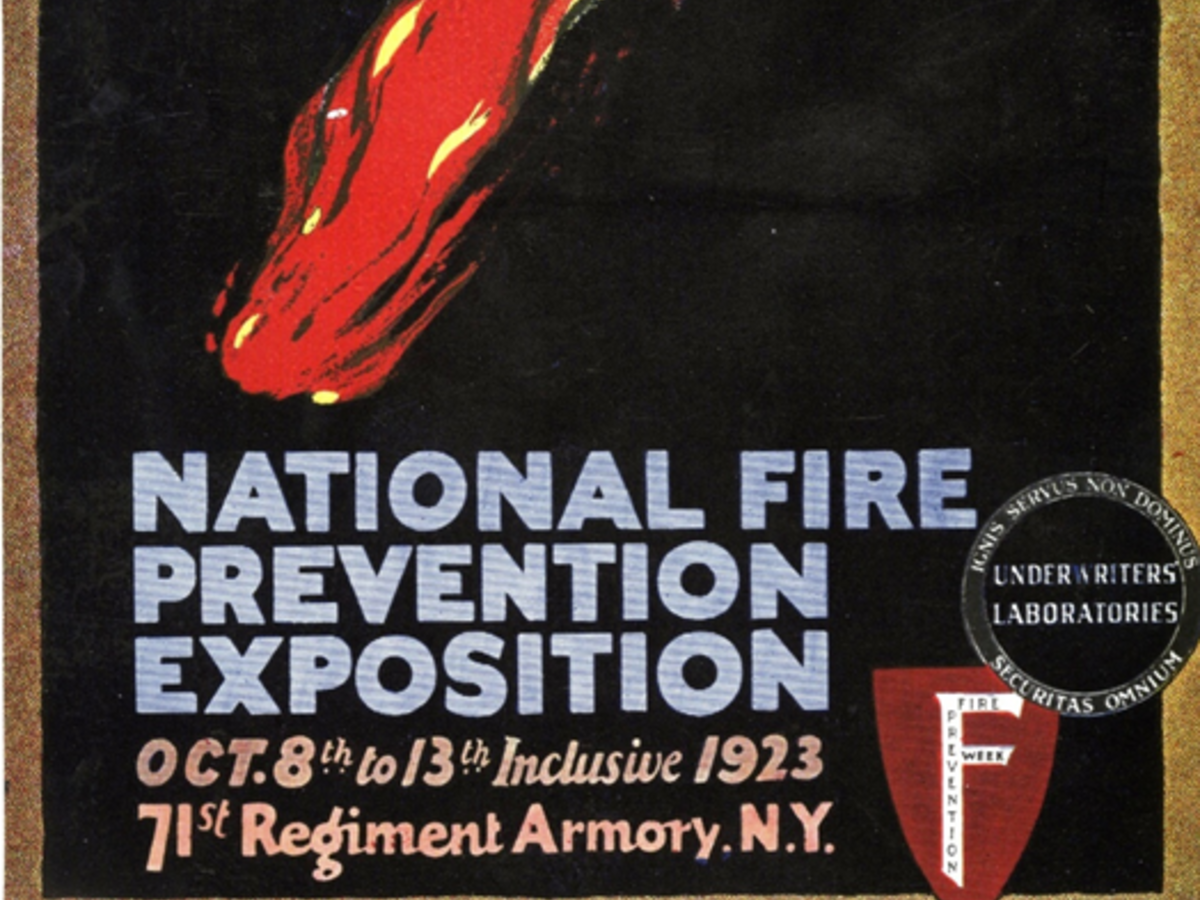 Fire prevention has always been at the heart of UL’s work, even before Fire Prevention Week became an official holiday in 1925.

“Never before in any country have architects, engineers, surveyors, municipal officials, legislators, insurance officials and fire surveyors met in council with professional and volunteer fire brigade chiefs and salvage corps officers,” the official report of the Congress boasted.

Mr. Merrill had initially planned to travel to London for the event and was even appointed as a speaker at the Congress. He had to withdraw at the last minute, however, when he was elected secretary of the National Fire Protection Association (NFPA). His appointment to NFPA added on to his already substantial duties as secretary and manager of UL, and Herbert Wilmerding, another member of the NFPA’s Executive Committee, was chosen to go to London in Merrill’s place.

Wilmerding read Merrill’s paper, “The Testing Principles Adopted at the National Fire Prevention Laboratory of Chicago,” during the sessions on “Fire Tests and Standardization” at the Congress. Less than ten years after opening his first lab, Merrill was sharing UL’s success story with the rest of the world’s fire prevention experts.

During the early 1900s, rapid urbanization, hurried building construction and a poor understanding of the causes of electrical fires led to infamous fire disasters such as the Great Fire of 1901, the Iroquois Theatre Fire (1903), the Baltimore Conflagration (1904) and the Triangle Shirtwaist Factory Fire (1911).

Of course, while these fires caused expensive damages to property, Merrill emphasized the high cost of human life, in a 1910 article for the NFPA Quarterly:

"Is there anything beyond this two hundred and fifty million dollars that we should include as America’s contribution to waste by fire?... Before the dollar marks, I would write the list of those who perished at the Iroquois Theatre in Chicago, on the steamer General Slocum…in the hall at Boyertown, at the school in Collinwood, in the mine at Cherry…what sacrifices would not be made could the children burned at the Iroquois, at Boyertown, at Collinwood, and the men of Cherry be returned to their families? They would include some things greater than money, I am sure." -  NFPA quarterly, 1910

In 1906, in an effort to arm consumers with the power to select life-saving devices that had been tested to UL’s rigorous safety Standards, Merrill created the UL Label Service and introduced the first UL Labels.

Public education was also a critical element in the fight against fire. As early as 1915, UL began producing fire prevention films. None of the earliest videos have survived, but stills from the film show a variety of products being tested.

It helped that George B. Muldaur, the general agent of the Laboratories, was not shy about getting the word out when it came to fire safety. In December of 1921, he sent a telegram directly to the White House upon the announcement that President and Mrs. Harding were going to place lighted candles in the windows of the White House on Christmas Eve. Muldaur informed President Harding that this would be setting a bad example for the rest of the nation, and Harding agreed not to proceed.

Muldaur also tirelessly promoted UL’s work in speeches around the country, both in person and by the newest form of popular media in the 1920s: the radio. In 1922, Fire Engineering magazine reported that “the Underwriters’ Laboratories’ contribution to the observance of Fire Prevention Day consisted of the most comprehensive radio program ever attempted.” On the evening of October 9, 1922, Muldaur gave a talk on fire prevention that was broadcast on 20 different radio stations throughout the U.S. and Canada.

1922 was a critical turning point in fire prevention history. At the annual meeting of the National Board of Fire Underwriters, the members were dismayed to realize that, in spite of all the work being done to raise awareness about fire prevention, fire loss was rising. Fire loss in the U.S. reached $521 million in 1922, the highest number ever recorded. In comparison, 1906 had long been considered one of the worst years in fire loss history due to the San Francisco earthquake and fire, but fire loss that year reached only $350 million.

The Fire Marshals Association of America had first declared October 9 to be “Fire Prevention Day” in 1911. The date was chosen to honor the 40th anniversary of the Great Chicago Fire. In 1920, President Woodrow Wilson had made Fire Prevention Day a national holiday, but by 1922 it had become clear that more recognition of America’s problem with fire loss was necessary. Thus, in 1922, the NFPA took on official sponsorship of a full National Fire Prevention Week.

Unfortunately, Merrill passed away on September 18, 1923, just a few weeks before the Exposition and Congress. Dana Pierce, who succeeded Merrill as the president of UL, attended the Congress and read a speech about UL’s work entitled “Safeguarding Electricity.”

In the 1920s and 1930s, UL’s contributions to Fire Prevention Week mainly consisted of radio broadcasts and informational displays.

When World War II broke out, fire prevention became a matter of national defense. After all, if America was spending money on fire loss, there would be less money available to fight the war. During Fire Prevention Week in 1941 and 1942, UL created fire prevention trailers that could be shown before movies to get the fire prevention message out to theater-goers everywhere. In 1941, the trailers were sponsored by almost 600 different organizations, such as fire departments, chambers of commerce and civic groups.

In the post-war years, UL returned to educational displays and booklets. In 1970, UL published “ABCD Spells Fire,” which taught consumers about the different types of fire extinguishers and the kinds of fires they could be used on. During Fire Prevention Week, UL sent two million copies of “ABCD Spells Fire” to fire departments and radio stations.

In 1972 and 1973, UL was chosen to create a display for Chicago’s Museum of Science and Industry during Fire Prevention Week.

In the 1970s and 1980s, public service announcements (PSAs) became popular. In 1988, UL created a PSA about the importance of regularly checking smoke detector batteries, and in 1989, this PSA was re-released for Fire Prevention Week.

UL continues to celebrate Fire Prevention Week today. In 2019, officials continue to educate people on the importance of fire safety with the “Close Your Door” campaign.