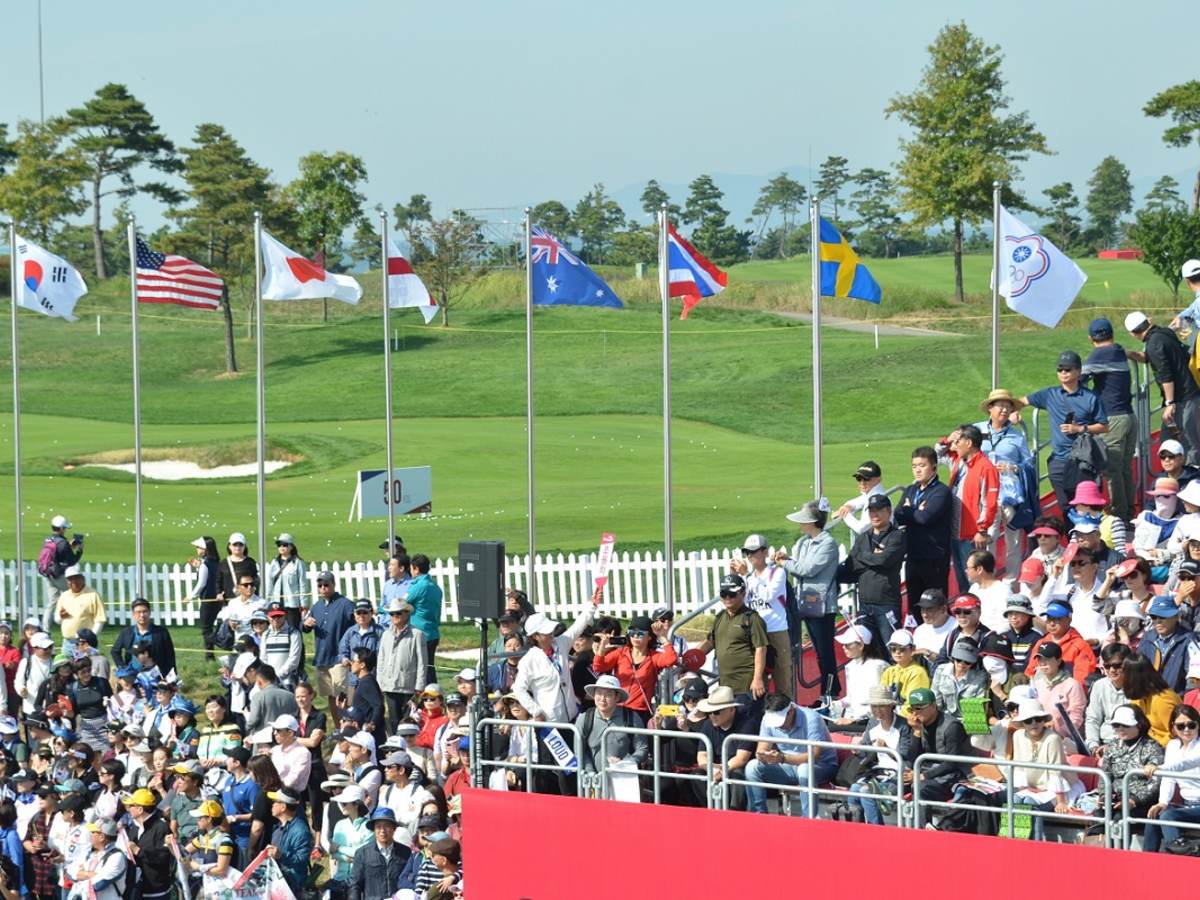 Fans from around the world had gathered at the Jack Nicklaus Golf Club Korea to watch the 2018 Ladies Professional Golf Association (LPGA) UL International Crown. They expected four days of great golf, not the arrival of Typhoon Kong-rey and one day of suspended play for the four-day tournament. Sunday’s final round was held under clear skies and the golf fans showed up by the thousands to root on their favorite team.

Filled with UL history displays and information in multiple languages to accommodate the international audience, the crowd gathered in the large exposition hall to interact with virtual reality stations, interactive displays, digital monitors for gamification and a chance for a photo with the tournament trophy.

More than an escape from the rain

The UL Fan Expo provided people with a series of experiences that demonstrated the many ways UL touches lives while providing the information they need to make smarter decisions.

As people crossed the threshold, they admired the walls, took photos with their smartphones and interacted with everything the Fan Expo had to offer. One group of people cheered as someone answered a quiz question correctly on one of the gamification monitors.

“We want fans to be able to see and experience all that UL does to help make the world safer, and more secure and more sustainable; and to have the opportunity to do that in a fun, engaging way through virtual reality, gamification and hands-on learning,” said Kathy Seegebrecht, chief marketing officer, UL.

UL employees eagerly welcomed visitors and explained all the Fan Expo had to offer. Over 4,400 golf fans visited the UL Fan Expo during Sunday's final round with many people walking out with mock crowns on their heads and smiles on their faces.

At the intersection of golf and global markets

Live professional sporting events invoke a lot of passion and support from fans of players, teams and in this particular case, countries. Golf is very popular in Asia, and the UL International Crown not only took place in Asia (South Korea), but it also consisted of four different countries from Asia: South Korea, Japan, Thailand and Chinese Taipei.

The LPGA expected an attendance record to be set with hosting nation South Korea entering the tournament as the top-ranked team.

“Asia is such an important market for us,” said Seegebrecht. “Having [the tournament] in Korea is really special as golf is so prominent and important to the country. It is a great way for UL to build brand awareness and relevance, so people understand what we do, not just who we are.”

The UL International Crown is a biennial golf tournament in which the world’s eight top-ranked countries compete in match play to “crown” the best golf nation.

The 2018 LGPA UL International Crown was the third edition and it took place at the Jack Nicklaus Golf Club Korea in Incheon, South Korea.

The event took place between October 4 - 7, concluding with hosting nation South Korea winning in front of its home crowd.