"Confident UL Marks matter to those who take the time to do a little research." 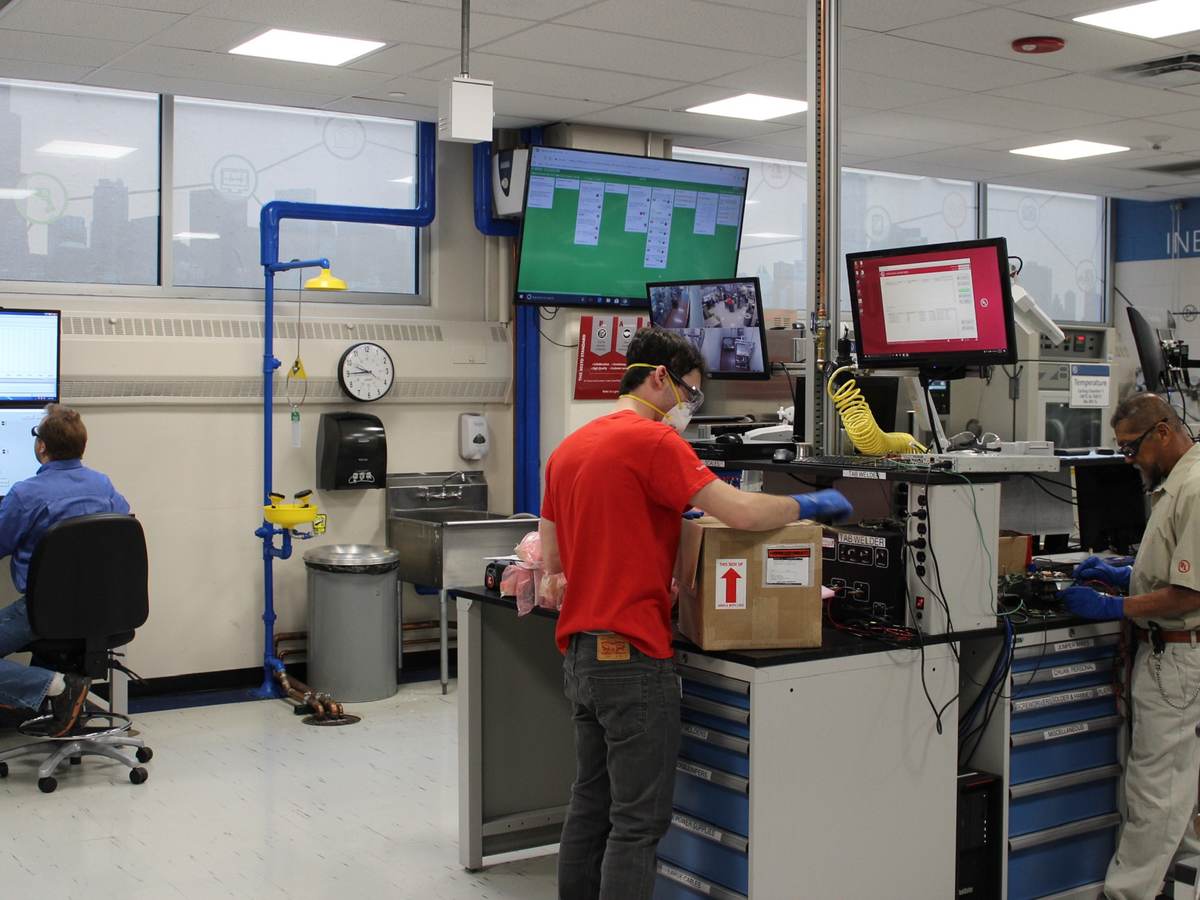 Jesse Rodriguez gets to blow things up for a living.

Batteries, mostly. He gets to drop batteries, crush batteries, submerge them in water and pump them full of way too much electricity.

Rodriguez is especially proud of puncturing things, which takes place when technicians drill holes into batteries.

“This is usually pretty fun for the kids,” Rodriguez said, pointing to the exploded bits of battery embedded in the ceiling and assuring us that everyone stood outside of the enclosed space when the battery exploded. “We did it on Take Your Child to Work Day. The kids had a lot of fun.”

Rodriguez is one of four engineering technicians who work in UL’s battery-testing lab in Northbrook, Ill., who push various batteries and cells to their breaking point to see if they comply with UL’s Standards. In some cases, they’ll stress a batteries component — overcharge them, overheat them — to test the batteries’ casing.

The lab itself is in a space that seems smaller than its role, but it is a testament to efficiency filled with small, enclosed rooms, various-sized explosion-proof boxes, numerous exhaust fans and vents, and an abundance of screens filled with charts, graphs and an ever-changing collection of numbers, all tied to the various testing mechanisms in the lab itself.

“It’s a pretty elaborate set-up,” said Matthew Thomas, the lab’s senior engineering technician. “We do a lot in a fairly small space.”

Thomas isn’t kidding. With three or four technicians moving throughout the room, there is a calming atmosphere that stands in direct contrast to the exploding, overheating, drilled-through and crushed batteries that are being tested throughout the space.

“It’s pretty calm down here,” Rodriguez said. “We’re all very tuned in to what we do, and we take every precaution necessary. It’s not like we’re running around blowing things up. There’s an order to all of it.”

Thomas said that calm comes from a staff who has worked together for a number of years, and a methodical approach to a job that requires precise results and measurements.

“We are testing batteries to their breaking points, so everything has to be precise—how we set up the equipment, how we set up the batteries and cells, how we measure our results—it’s an exact science when it comes to testing,” Thomas said. “The testing itself can be loud and messy but we track the results as precisely as we can. There’s no fluctuation when it comes to testing our Standards.”

The Standards, in fact, are king, ruling everything that happens within the lab once they’ve been passed down from UL engineers and the UL Standards committees.

Each UL Standard is governed by a Standard Technical Panel (STP), which is the consensus body and is required to have a balance of interest. The STPs are an important part of the process by which UL develops and maintains its Standards for safety.

The STP is comprised of different interests, such as producers of products; supply chain participants, like suppliers and retailers; consumer advocate groups; government organizations; inspectors, testing and standards organizations; and general interest, like consultants.

“Standards continue to evolve and change as technology changes and new products are developed,” Pappas Jordan said. “Scopes and requirements of current UL Standards may need to be revised to address new technology features.”

Thomas, who has been with UL for 19 years, said that UL Standards can apply to a complete battery or a single cell. In some cases, they’ll test batteries in tandem with the products they power, especially if those products, by design, might put a lot of stress on the batteries.

“Hoverboards are the best example, right now,” Thomas said. “We’ll run tests to see how the batteries will react under certain conditions, which are much different than the conditions for a laptop or a phone.”

Thomas said he thinks testing small batteries for e-cigarettes is about to play a major part in the lab’s daily activities.

“Things are happening in the news every week, it seems,” he said. “It takes different equipment and different ways to test them for normal wear and tear, i.e., how the battery charges and how the vapor impacts the battery. The batteries are really complex. I was amazed at how much they fit into that little battery, so there’s a lot to test.”

Thomas said that UL’s Standards are as relevant now — if not more so — than ever.

“Back in the day, my grandparents would say they would never buy something without a UL Mark,” he said.

Because of what he knows, Thomas said his job has had a direct impact on his life as a parent, consumer and member of society in general.

Thomas said he’s confident UL Marks matter to those consumers who take the time to do a little research.

As can Rodriguez and the other engineering technicians in Northbrook.

“We see the news, we know what can happen,” Rodriguez said. “We joke around about blowing things up, but we know what we do is important.”

This article was originally published in On the Mark, a UL publication. Marco Buscaglia wrote the article.

Download the digital pdf to read more stories from On the Mark.