How did UL survive the Great Depression? 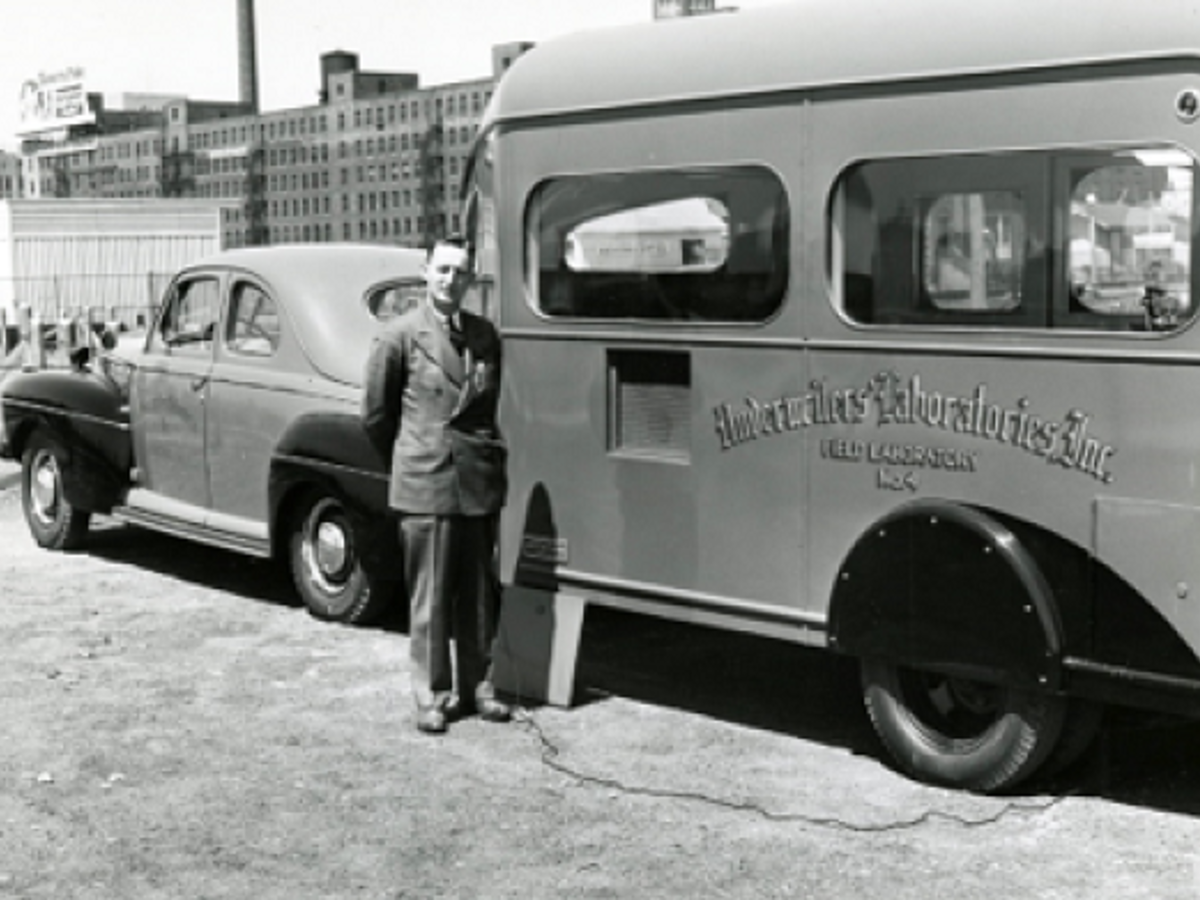 “I think you will agree with me that we all share a responsibility to help through the coming winter those who are in need because of the bad industrial conditions. We know that thousands of people of all classes are out of work with no hope of employment until the spring…we are among the more fortunate; let us be generous to those who are not.”

By November of 1930, the Great Depression was in full swing in the United States. One year earlier, in November of 1929, the stock market had crashed catastrophically, wiping out the investments and bank accounts of countless Americans and pushing the global economy into a downward spiral that would last until World War II.

So where did that leave a 35-year-old safety science organization?

By 1929, UL was a fixture in the Chicago landscape. The organization had signed its first test report in 1894, incorporated in 1901 and settled into its headquarters at 207 E. Ohio St. in 1905. Branch testing stations buzzed with activity in New York and San Francisco. Engineers, inspectors and office staff were hard at work testing, inspecting and labeling products in ten different UL departments: Protection, Hydraulic, Electrical, Gases and Oils, Chemistry, Casualty and Automotive, Burglary Protection, Label Service, Progress Control and Service and Equipment.

UL’s headquarters, nicknamed “The One Place Where It Pays to Play with Fire,” were located at 207 E. Ohio St. in downtown Chicago.[/caption]

UL employees enjoying themselves at the company picnic in 1928, a year before the stock market crash of 1929.[/caption]

With the collapse of the economy, however, the odds appeared to be stacked against UL. Business in many of UL’s key industries quickly dried up, which put the organization in a precarious position. After all, if manufacturers had no money to produce their usual bevy of fire extinguishers and automobiles and switches and bank vaults, what would the UL engineers test?

UL President Dana Pierce had been at the helm since founder-president Merrill’s death in 1923. Although his background was in academia rather than business, he quickly deduced and acknowledged a very important fact: UL’s fortunes were directly tied to the industry’s fortunes. If the economy expanded, as it had with the birth of modern technology in the early 20th century, UL had to expand with it. And more importantly, if the economy retracted, UL had to retract with it.

It was this approach that allowed UL not only to survive when countless other businesses faltered but to come out of the Great Depression stronger than ever before.

UL President Dana Pierce (sitting at desk) in his office in 1930. One employee remembered him as “a charming and cultivated gentleman who kept us afloat during the depression.”[/caption]

Pierce began by tightening UL’s belt. In the 1931 annual report, the Board of Directors noted that “during the past twelve months, reductions of expense have been effected in all lines where possible without injury to the essentials of the work of the institution.” This meant cutting back on travel, printing and the purchase of new equipment.

UL also made salary cuts in order to avoid as many layoffs as possible. Depending on how much money an employee made, his or her salary was decreased by between two to 20 percent. Unfortunately, as was true with nearly every business in the early 1930s, some layoffs were inevitable. When UL transitioned out of the worst of the Depression a few years later, however, a policy was created that welcomed anyone who had been laid off to come back to the Laboratories.

Second, UL had to determine which industries were “Depression-proof.” Curiously, UL engineers found that the early years of the Depression actually encouraged some pre-existing clients to submit new product designs and variations. As Pierce observed in 1931, “…manufacturers during a period of reduced production turn to the development of new patterns.” To further encourage new work submittals from clients, UL simplified standards and specifications wherever they could without compromising public safety, understanding that manufacturers would likely need to work with fewer employees and cheaper materials.

Also, there were some products that people still needed to buy and use, even in an economic downturn. For example, one engineer, C.J. Krieger, was asked to review “more alleged defective labeled [fire] hose during the year 1930 than in any previous year of his experience.” Krieger speculated that business owners cared more about the quality and safety of the products they bought during difficult financial times because they had spent precious, hard-earned money on these essential devices.

UL engineer C.J. Krieger was busier than ever during the Great Depression. At right, two UL chemists investigate the rubber compounds used in fire hose, 1931.[/caption]

The final key business tactic was to constantly be on the lookout for new fields that UL could break into. Pierce knew that UL would have to generate more work for the organization to stay active, so he kept his engineers busy. For example, an explosion testing station was opened in Lemont, Illinois in 1929. This gave UL the distinction of being one of the few organizations who could handle controlled explosions and helped the organization become a testing authority in the emerging field of air conditioning. At Lemont, UL engineers had the unique ability to conduct research into the combustion risks posed by air conditioning units. These investigations led to improved hermetic motor design, safer use of refrigerants and requisite factory installation of overcurrent devices.

The Explosion Testing Station opened in Lemont, IL in 1929. The grounds had a small lake that provided water (center) and a bunker for the men to hide in during explosions (bottom).[/caption]

Of course, beyond everything UL was doing to keep itself afloat, there were also broader societal concerns. Pierce penned a bulletin on November 7th, 1930, suggesting that all UL employees should combine their charitable efforts and create the Underwriters’ Laboratories Unemployment Relief Fund. Pierce stressed that nobody was obligated to donate to the fund: “The decision is for each one to make absolutely freely and no explanations are expected or desired…I wish it understood that I am simply giving you an opportunity to do whatever you can in what I think is probably the most effective way.”

It seems certain that every UL employee would have known family members, friends and neighbors who were struggling with lowered incomes, lost savings, unemployment and even homelessness. And so, in spite of the fact that salaries had been cut and people’s wallets had been stretched thin for over a year, UL employees responded overwhelmingly to Pierce’s call to action.

In total, the UL Unemployment Relief Fund raised $2,875 between November of 1930 and March of 1931. In today’s dollars, $2,875 would be equal to almost $45,000. The money went to the Chicago Commons, a social settlement that had been founded in 1894 to serve immigrant communities and impoverished neighborhoods in Chicago. During the Depression, the Commons was a leader in fighting for better relief stipends and job programs for the unemployed. Each month, UL sent a check for approximately $500-650 to Graham Taylor, a well-known philanthropist and the treasurer of the Commons.

Demonstrating UL’s long commitment to corporate social responsibility and creating safer working and living environments for all, Dana Pierce sent this bulletin to employees on November 7th, 1930, asking for charitable contributions to help the unemployed. “We are among the more fortunate,” Pierce wrote. “Let us be generous to those who are not.”

Sadly, Dana Pierce passed away suddenly in 1934. He had weathered the worst of the Depression years, and his successor, Alvah Small, would see UL through the rest of the 1930s and most of the 1940s. Pierce’s hard work during the Depression positioned UL to thrive in the late 1930s. Although the economy was still poor in 1935, Alvah Small was able to move the New York Testing Station to better quarters, and he also sent the first two traveling laboratories across the United States to perform on-the-spot testing and teach rural communities about UL’s work. In 1936, Small created the first employee pension plan and helped UL break into important electric shock and lightning protection testing.

Dana Pierce, left, and Alvah Small, right, guided UL through the hardships of the 1930s.[/caption]

Because UL managed its finances carefully during the Depression, three facilities actually underwent expansion during the 1930s. Here, ca. 1936-1937, a group of employees stands outside the new San Francisco office on Sansome St.[/caption]

UL employee George Hilton poses in front of a traveling laboratory at the Chicago office before departing for the east coast, ca. 1940s.[/caption]

As the world outside of UL’s laboratories shifted and changed in the late 1930s, the tumultuous forces of World War II were gathering on the horizon. Fortunately, UL would enter this difficult era stronger than ever before – a strength made possible by the hard work, dedication and sacrifices of countless UL employees during the Great Depression.