Learn more about the new GB standard that will be implemented on April 1, 2022. 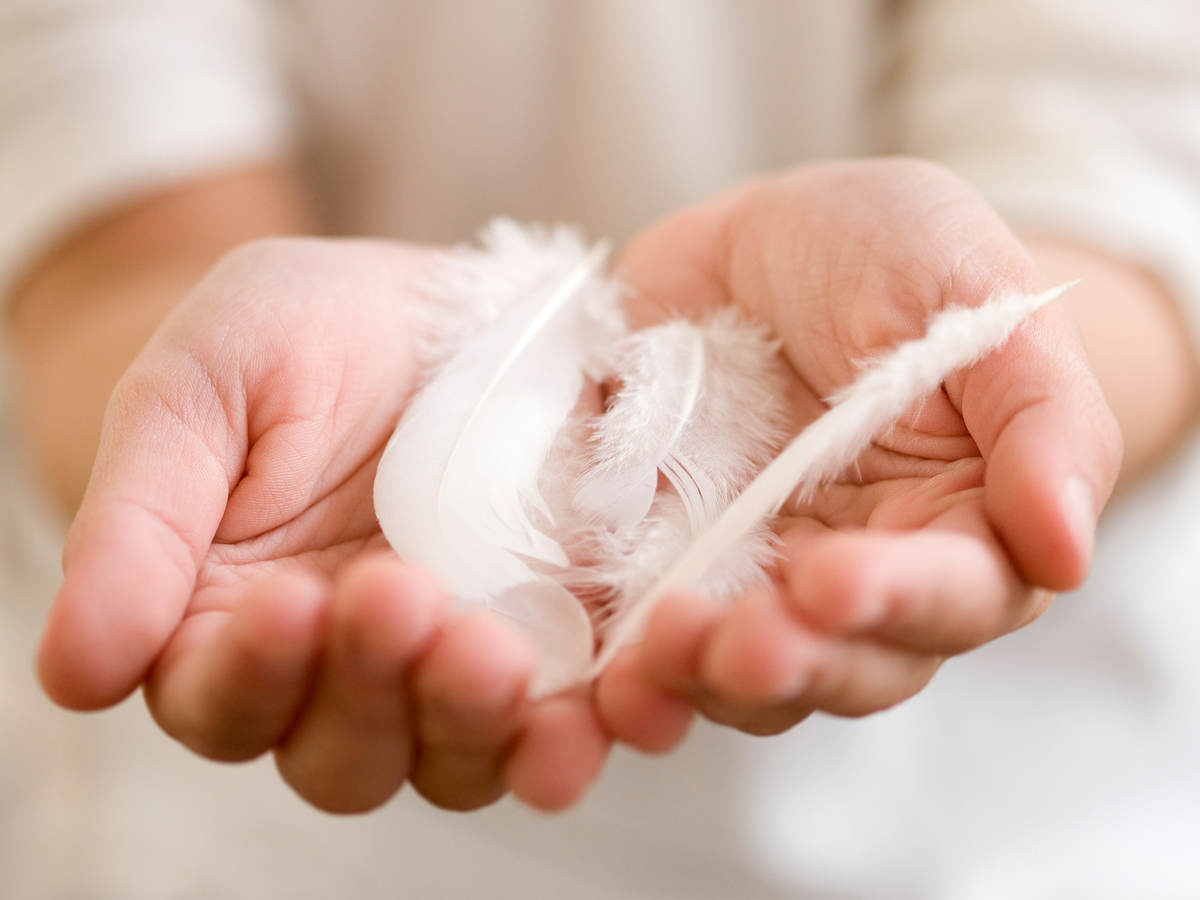 On March 9, 2020, China’s State Administration for Market Regulation (SAMR) and Standardization Administration of China (SAC) issued the new GuoBiao (GB) standard, GB/T 14272-2021 – Down Garments. This new standard will replace the previous standard, GB/T 14272-2011, when it takes effect on April 1, 2022. The following summarizes the primary differences between the two standards.

The scope of application has changed in the new version of the standard. The previous standard applies to textiles as the main fabric and down as the main filler for the production of a variety of clothing. The new standard applies to clothing filled with down, including those produced with textiles as the main fabric and down as a filler. While it allows other fillers for use in plackets, pocket covers, hoods, collars and other small parts, it does not explicitly apply to clothing that is filled with down and other mixed, layered or partitioned fibers.

The previous standard requires instructions for use of finished products to be carried out in accordance with GB 5296.4 Instructions for Use of Products – Part 4: Textiles and Apparel, and GB 18401 National General Safety Technical Code for Textile Products. This requirement was fulfilled by providing the name of the filling, the down content and the net weight of the down.

The new standard stated that instructions for use are outlined in GB/T 5296.4 and GB 31701 Safety Technical Code for Infants’ and Children’s Textile Products. Down fillers should be labeled with the down species, down content and net weight of the down.

According to placement requirements in Appendix A of the previous standard, the filler name field should include both the down color and type. The new standard eliminates the color requirement and only calls for down type, e.g., goose, duck. Additionally, the wording in the new standard has changed from “down content and net weight of down” to “down and net weight of down.”

The new standard adjusts and partially modifies the language pertaining to the quality of the finished garment’s appearance, including sewing, size deviation and ironing.

The new standard aligns its fiber content requirements to GB/T 29862 Textiles – Identification of Fiber Content, rather than the previous standard, FZ/T 01053. It adds that down clothing intended for infants and children should comply with GB 31701.

GB/T 14272-2021 adds requirements for cross-staining and color fastness relating to perspiration and, in the case of products for infants, saliva. The standard eliminates the requirements found in the previous standard for the use of single adjacent fabric, clearly indicating that cross-staining is evaluated according to method A laid out in GB/T 31127-2014 Textiles – Tests for Color Fastness – Color Fastness to Transfer in Joints. 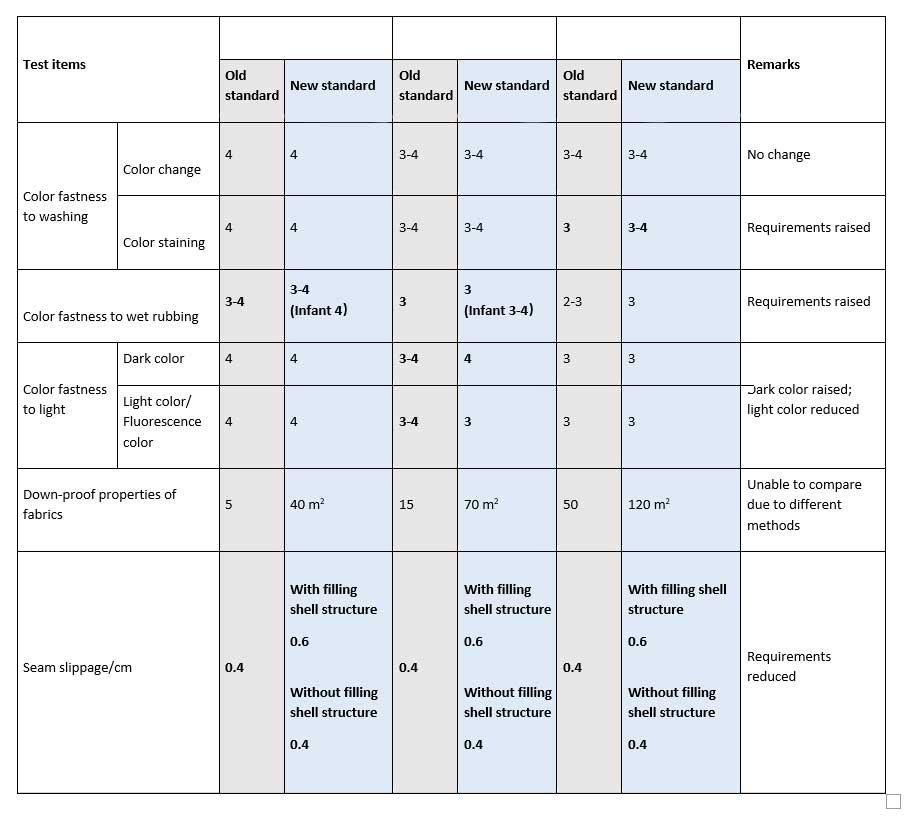 The new standard also eliminates the test method for seam slippage found in Appendix D of the previous standard, specifying that the degree of slippage in the seam is determined according to the method found in GB/T 21294 Testing Methods of Physical and Chemical Performance of Garments. In particular, the new standard proposes that, in determining the slippage of down clothing with a filling shell structure, the assessment only applies to the fabric and material that is not sewn together with the down but not to decorative textile components on the shell fabric.

The specified method for testing down-proof properties of fabrics is now “Tube test for garment” (Appendix D), instead of “Rubbing test for down bag” (Appendix E) in the previous standard. This replacement method evaluates the down-proof properties of the finished product as a whole, simulating actual wear more closely and avoiding sampling difficulties caused by the complexity and variety of clothing styles.

The new standard also eliminates a clause that addressed the lack of assessment of microorganisms when the oxygen number is equal to or less than 10 mg/100 g. It removes the hygiene requirements for microorganisms in down found in Appendix A, Table A.2 of the previous standard.

The new standard adds limits for down filler assessment of alkylphenols and alkylphenol polyethoxylates. Measuring should proceed according to the liquid chromatography-mass spectrometry technique described in GB/T 23322-2018 Textiles – Determination of Surfactant –Alkylphenols and Alkylphenol Ethoxylates.

Determination of down proceeds in accordance with GB/T 10288-2016 Testing Methods for Down and Feathers, removing the test method found in Appendix C of the previous standard — establishing clearer and precise requirements for goose/duck species identification and the turbidity testing method. The filling power test method has also changed from the original oven method to the steam reduction method found in Appendix C. 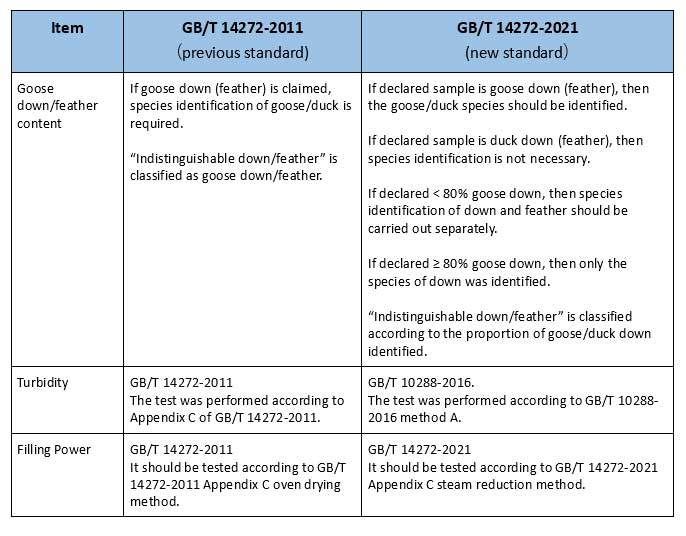 The net weight of down used in finished products in both standards is measured according to the method in Appendix B. However, the new standard distinguishes between down garments with and without a filling shell, and the test method has also been updated.

Compared to GB/T 14272-2011, the new standard changes the specific requirements for down quality and uses down as the key point to label and evaluate it. These new requirements are as follows: 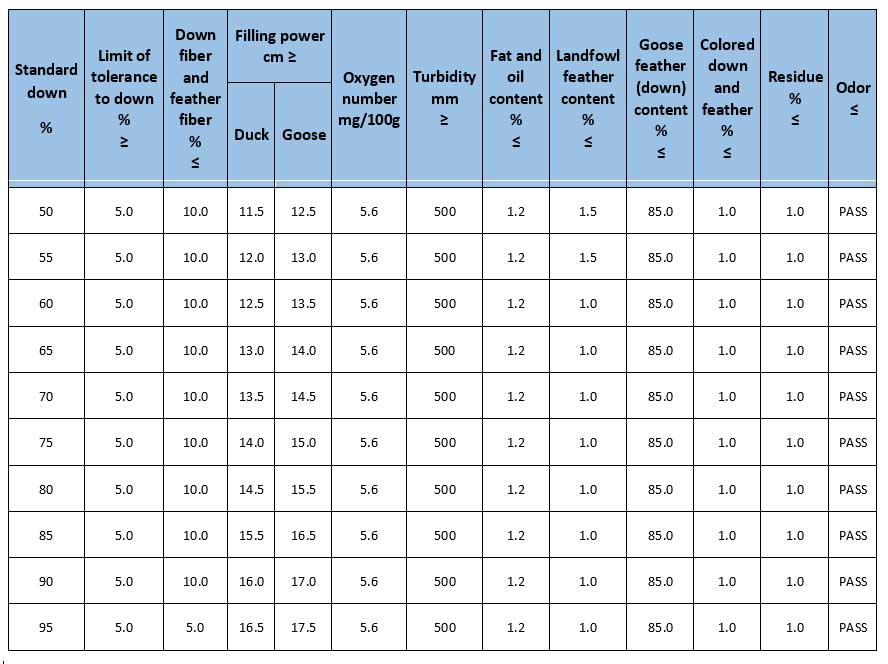 For reference, the following are the values given in the previous standard: 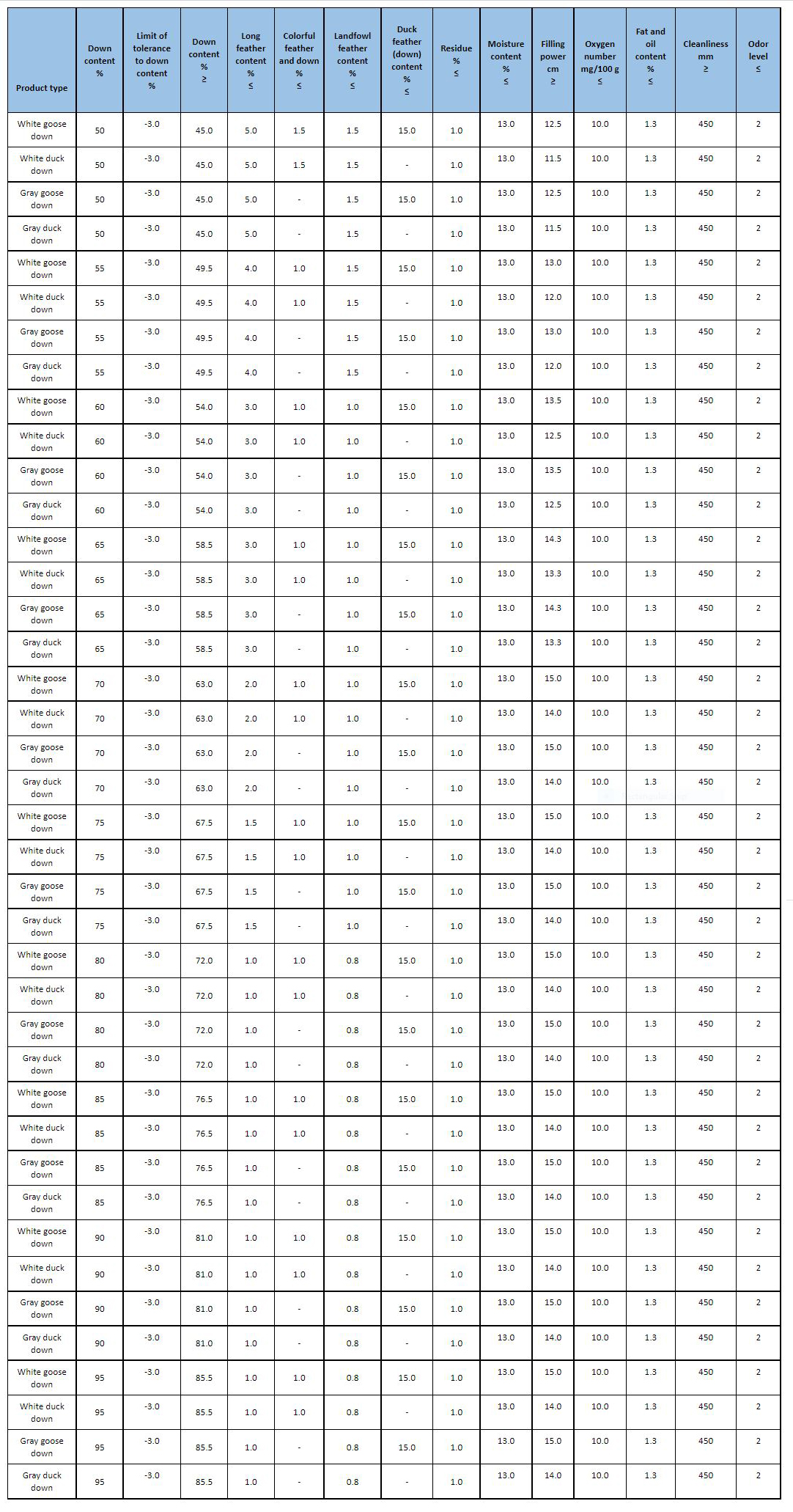 UL offers a wide range of China National Accreditation Service (CNAS) and China Metrology Accreditation (CMA)-accredited testing for Chinese testing standards to help our customers demonstrate product compliance and keep up with the latest industry developments. Learn more about the tests and assessments we conduct according to standards for Chinese market access. 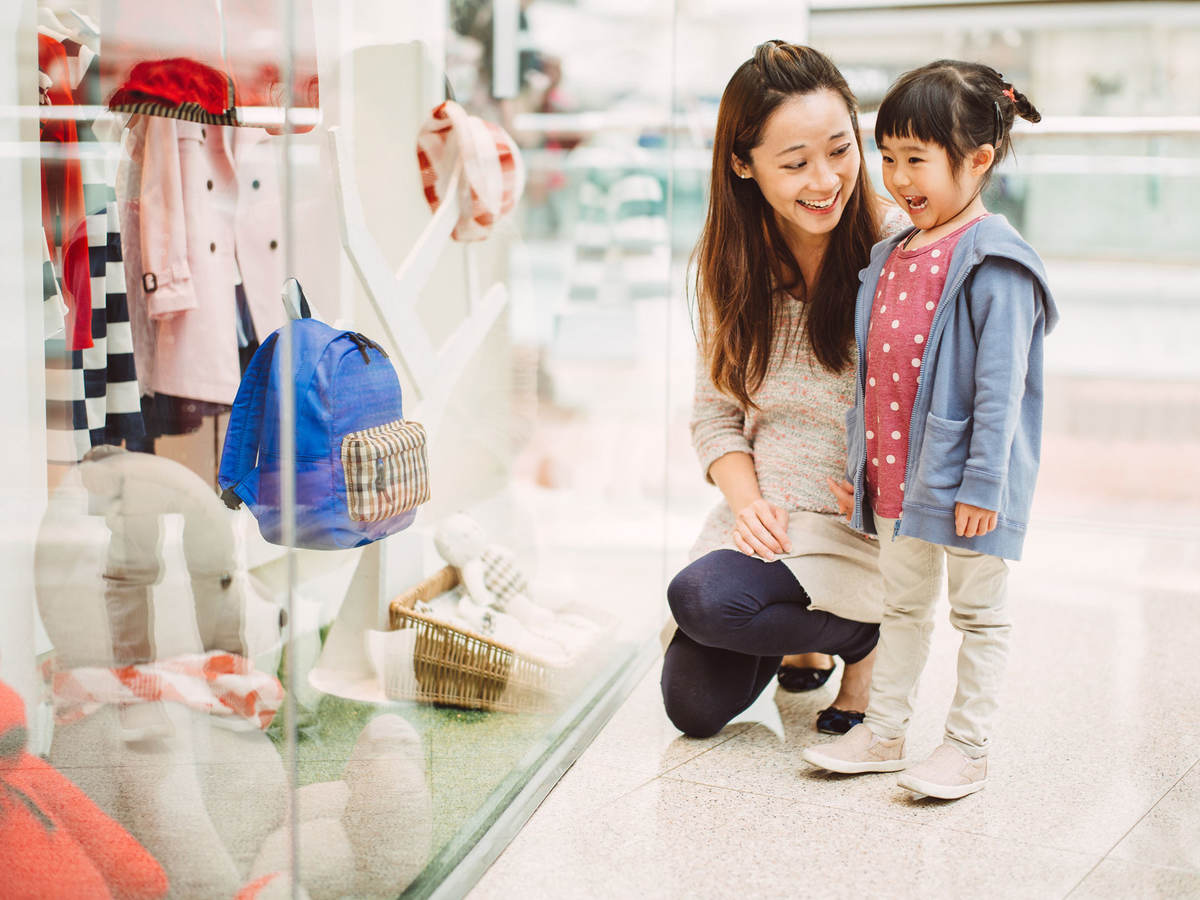 UL can conduct GB tests and assessments, from selection of raw materials to finished product inspections, to help ensure that you are in compliance with Chinese national standards. Adhering to GB standards is essential for successful entry into China.