UL Teams Up to Renovate Home Steeped in History

As part of the UL Mission to create safe working and living environments for people everywhere, volunteers from UL help renovate a historic house in Elgin, Illinois for a deserving family. 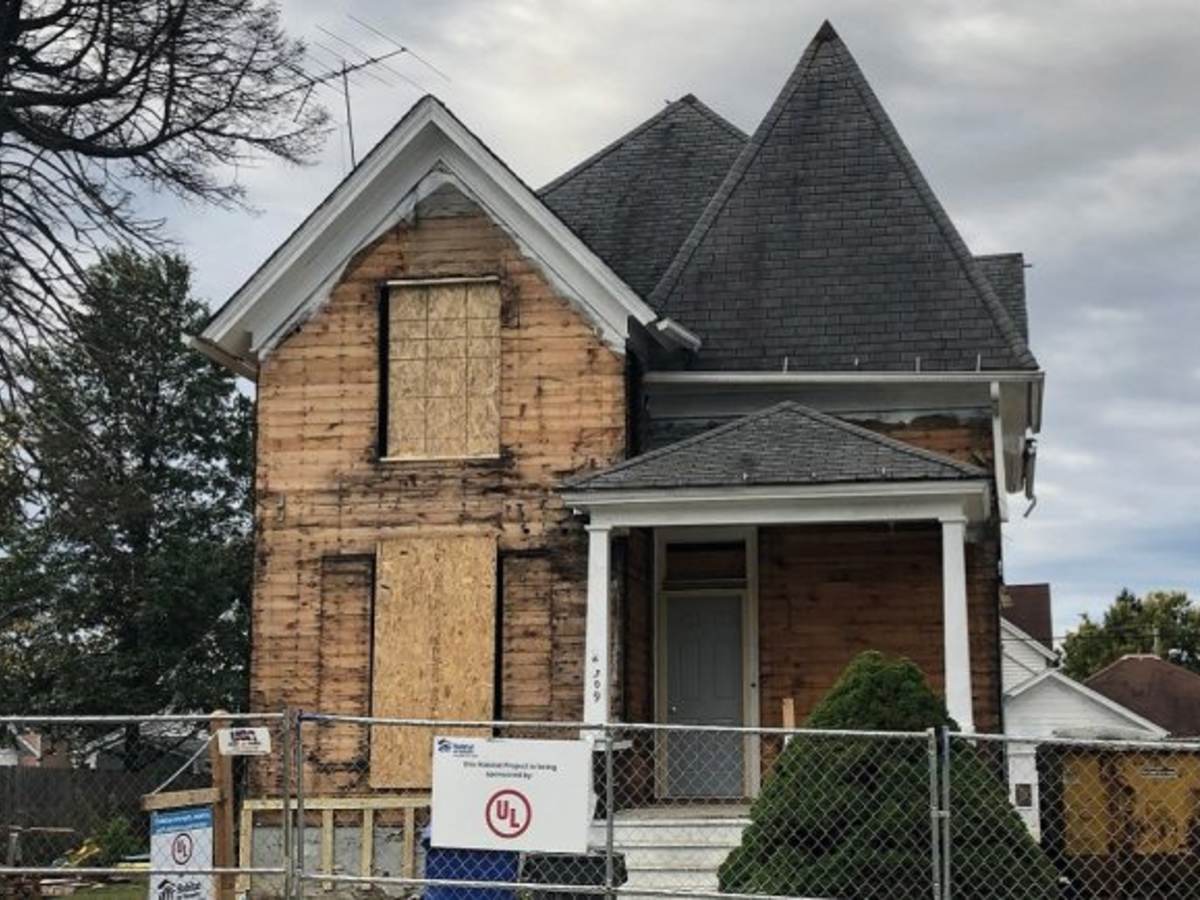 In February of 1835, two brothers got in their wagons, said goodbye to their home in upstate New York and struck out for the west. Hezekiah and James Gifford were leaving behind everything that was comfortable and familiar and trading it in for danger and the potential of hunger, sickness, disaster and ruin. However, they had a vision of what they wanted to find: a new place to build a good life for their families. Their travels ended when they saw the perfect spot to settle 38 miles west of Chicago, right on the Fox River. James, the elder brother, decided to name the community after his favorite Scottish song, “Elgin,” which is a village in the Scottish province of Moray.

Nearly 60 years later another native New Yorker, UL’s founder, William Henry Merrill, Jr., set out for Chicago. The times had changed, and he did not have to travel by covered wagon. Moreover, he was coming to the area for a different reason than the Giffords: to work for the Chicago Fire Underwriters Association as an electrical inspector. By this time, Chicago had grown from 3,000 residents to more than one million people.

The story of the Giffords and the story of UL’s founder do not have much in common beyond the fact that they all came from New York and settled in the Chicago area. However, we can learn similar lessons from looking at their lives: lessons about resilience, perseverance and a willingness to leave behind the old and brave the risks of the new.

Today, Elgin and UL are exploring a new connection to one another. UL is partnering with Habitat for Humanity of Northern Fox Valley to sponsor the renovation of a historic house in Elgin. When completed, the house will go to Elgin resident Joleena Mejia and her six children. UL is proud to help the Mejia family attain what the Giffords also set out to find all those years ago: a new place to settle and build a good life.

Back in time: A look at 309 Standish Street

The UL-sponsored Habitat house that will become the Mejias’ new home was originally built in 1891. It is located at 309 Standish Street on the west side of the Fox River. The west side has not always received as much attention as Elgin’s historic east side, where downtown Elgin is located. However, the story of 309 Standish is an important one. The lives of the house’s residents – a retired sheriff, watch factory employees and a reporter, to name a few – tell an important part of Elgin’s story.

The land that is now 309 Standish Street has a long chain of custody. After the Giffords settled Elgin, their friend Samuel Kimball became “the proprietor of the west side,” where he opened Elgin’s first mill. The residents of the west side tended to be members of the working class, and many of them were employed at the Elgin National Watch Company’s famous factory, which opened in 1866.

At some point in the 1800s, the land was purchased by Homer Hendee. The Hendee family claimed to be descendants of Myles Standish, who came to the United States on the Mayflower in 1620. Standish Street was named for this connection.

George P. Lord, a wealthy businessman and philanthropist, bought more than 100 lots of land from Homer Hendee in 1882, and he constructed several houses on these lots. It is not clear if 309 Standish was one of them, or if the house was built after Louise Mixer bought the lot in 1891. The house’s address was originally 105 Standish Street, but the block’s addresses were shifted in 1894. Ever since then, the house has been 309 Standish Street.

The first owner of 309 Standish Street was Louise Mixer, who was born in France in 1842. She was the widow of Charles S. Mixer, a fascinating figure in Elgin history. Charles was originally born in New Hampshire and he worked as a hotel owner until the outbreak of the Civil War. He enlisted in the Union Army and settled in Elgin after the war, where he worked as a sheriff and a realtor.

He owned many properties in Elgin, and his influence can still be seen today. For example, he built the Mixer Block apartments in 1883, which are still standing.

He and Louise married in 1885, just one year before his death. According to probate records, Louise eventually had to sell much of her late husband’s properties to settle his outstanding loans and debts. She moved into the home in 1891 and lived there until 1903 when she sold the house to George Midgley for $2,650. Louise Mixer passed away in 1913.

George Midgley (also appearing some places as “Midgeley”), the next occupant of the house, was another resident whose life tied closely into Elgin’s community history. Like many others in the neighborhood, he worked at the Elgin Watch Factory as a machinist.

The Midgleys were the first family to live at 309 Standish Street. George and his wife Margaret raised at least four children in the house: Alice, Bertha, Earl and Roy. Alice was a teacher at two Elgin elementary schools, and Bertha also worked at the Watch Factory. Earl left Elgin and moved to Oak Park, while Roy remained close to home, employed at a local service station.

Unfortunately, Margaret passed away in 1925. George remarried Lulu Haase, a fellow Watch Factory employee, in 1926. When George passed away in 1938, Lulu remained in the house until her death in the early 1960s.

Not much is known about the Murray family, the third owners of 309 Standish Street. Earl Murray worked as a carpenter, and he lived in the house with his wife Margaret for a few years in the early 1960s. They sold the house to Verla Ranstrom around 1966.

Verla Ranstrom, a “pioneering” female reporter who worked at the Elgin Courier News, was the next resident of 309 Standish Street. Ranstrom was a nontraditional figure in many regards. She studied at the University of Illinois at Champaign-Urbana, and when she graduated, she got a job covering the end of World War II in France for the San Francisco Herald and AP Newswire.

A divorcée, she moved to Elgin with her two children in 1960 to be closer to her mother. She worked full-time as one of the few female reporters in the Fox Valley in the 1960s and 1970s. Ranstrom was particularly passionate about environmental issues, and she was known for corresponding with “The Fox,” an environmental vigilante in Elgin.

Ranstrom was the one who applied for a historic plaque for the house, and her experience and competence as a reporter undoubtedly helped her in this endeavor. Her research on the Mixers and the Midgleys definitively proved the significance of 309 Standish Street, and the Elgin Heritage Commission granted the house a historic plaque in 1999.

Verla Ranstrom passed away in 2012 at the age of 92. After that, the house remained unoccupied until it was acquired by Habitat for Humanity of Northern Fox Valley for the Mejia Family.

A new chapter: UL and Habitat for Humanity

UL and Habitat have similar missions: while UL works to create safe living environments for all people, Habitat for Humanity of Northern Fox Valley brings people together to build homes, communities and hope.

Over the next several months, Joleena Mejia, Habitat for Humanity employees and UL volunteers will work together to renovate 309 Standish Street. The work has already begun, and 150 UL employees have volunteered more than 1,100 hours working on the house. By renovating the house, UL and Habitat for Humanity are helping to ensure that an important part of Elgin’s history will be preserved for future generations.

The UL Archives staff would like to thank the staff of the Gail Borden Public Library and the Elgin History Museum for their gracious assistance with the research for this article.

The background information on Elgin primarily comes from the book Elgin: An American History by E.C. Alft. The full text of this book can be found online here: http://www.elginhistory.com/eaah/.

Elgin directories from 1900-present were accessed at the Gail Borden Public Library. The Elgin History Museum provided access to the directories pre-1900, as well as Mixer’s probate records, the Watch World Magazine and the 1960s-era photograph of the house.

The information about Verla Ranstrom and additional background on the house comes from the following two Elgin Courier News articles:

Finally, the city of Elgin provided the historic plaque application and records of old building permits.