UL Fire Researchers Test Use of Fans to Control Blazes 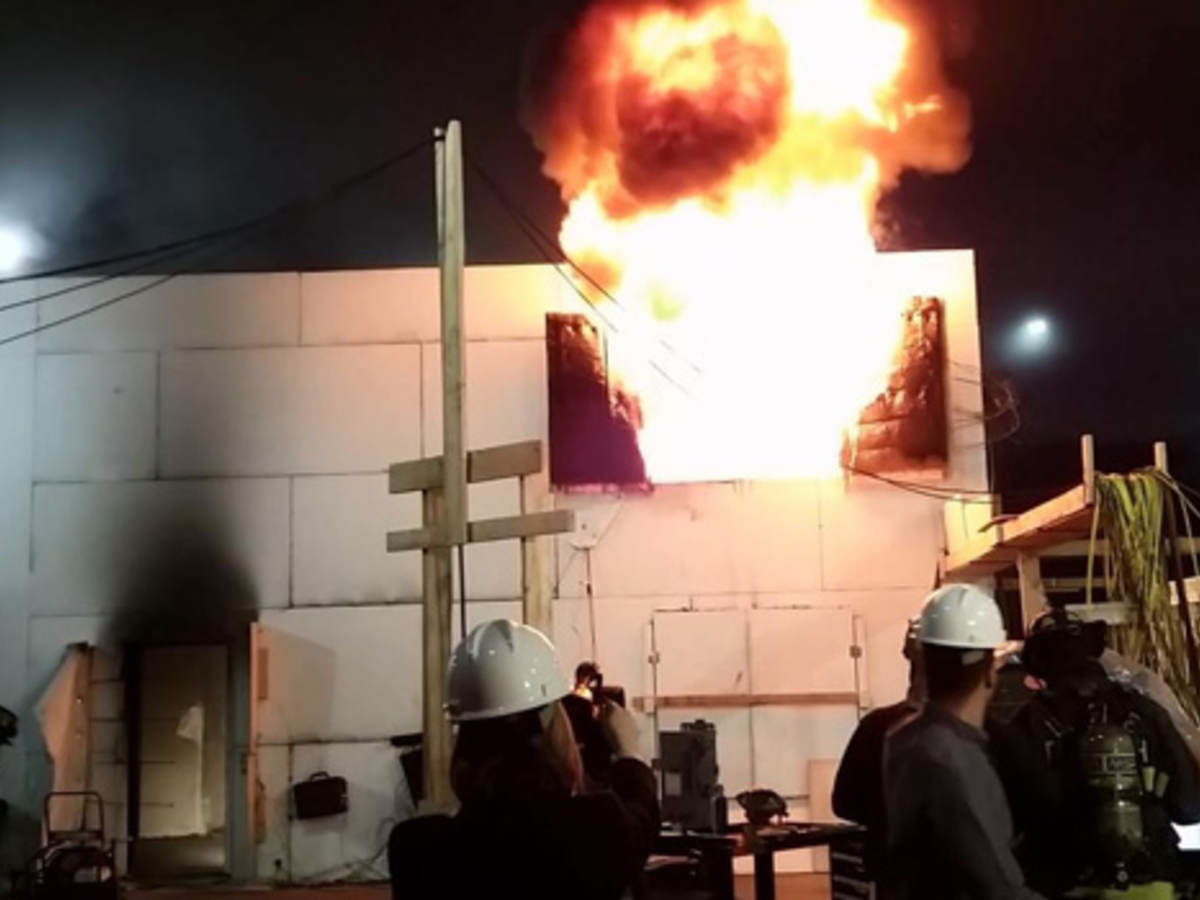 Inside a building on UL’s Northbrook campus, two full-scale house structures were built and furnished. Each home was equipped with cameras, wires and sensors, all placed in order to collect as much data as possible as UL’s Firefighter Safety Research Institute (FSRI) researchers set and extinguished multiple fires all in the name of science.

Researchers built these houses last December inside the Fire Laboratory at UL’s headquarters. Then starting in January, UL researchers stocked the houses—a 1,200-square-foot ranch and a two-story 3,200-square-foot colonial home—with furniture, setting them ablaze and observing the path of the fires. At each burn trial, researchers also set up a large smoke clearing fan in front of the front door.

At the beginning one experiment, lead researcher Steve Kerber picked up a microphone and announced the start, which caused a hush to fall on the lab. Kerber counted down from “five,” ending with “ignition.” Within a minute, a small flame became visible on the monitors set up to observe what was happening inside each structure.

As the fire grew, Kerber announced when the temperature in the room reached 300 degrees and continued to describe the relevant temperature and fire spread milestones. Once the temperature passed 1,600 degrees, a firefighter opened the front door and turned on the large fan, blowing a high-pressure stream of air into the burning house.

This technique is called “positive pressure ventilation” (PPV) and its use is to forcibly route, and thereby control, the air inside that is filled with combustible by-products. The hypothesis under study is that this forced air can direct flammable smoke and heat away from a designated area, and that it can improve conditions for firefighters advancing into the house and for potential occupants.

The sensors placed in the homes collected data on temperature, heat flux, and characteristics of gas such as its concentration and speed through room openings. In each experiment, researchers activated the fan positioned by the door at specific times. Other factors were varied, such as how windows were opened or closed, and how water was used to put out the fire.  The variations on the placement of fans and the homes’ internal conditions provided researchers with a unique and valuable data set on the use of PPV on single-family homes.

Between Jan. 5 and Feb. 5, FRSI staff conducted 26 separate trials in the homes, usually one in the morning and another in the afternoon. On each day of the experiment, about 50 firefighters from across America and other countries came to watch the experiments at the invitation of Kerber. Most watched the burns from the lab’s observation deck, where television monitors broadcast views inside the homes. The visiting firefighters also toured the houses before and after the burns to see up-close how the fire progressed. Sessions also included a discussion with Kerber on the experiments.

For many firefighters, seeing the experiments up close provided insights into fire dynamics they don’t normally see. Usually by the time a firefighter is at the scene, a fire is fully underway. At UL’s fire research facility, firefighters were able to see how and where a fire starts, how it grows and reacts to the tactics they employ. Understanding what happens from the start of a fire to flashover is critical in how they may make on the ground decision.

Firefighters who attended the burns go through the homes before and after the fires, assessing and discussing what they just witnessed. Many have said how what they have seen in UL’s research will help save lives (firefighters and homeowners) and property. Many have employed new tactics and seen the positive impact (more pictures of the burns can be found here).

The research supporting these experimental burn demonstrations was funded by a $1 million grant from the Department of Homeland Security (DHS), awarded in December 2013 to FSRI. A 27-member PPV Technical Panel was assembled from more than 120 firefighter applicants, and the panel met initially to set up the experiments, again to view them and will convene a third time to develop and discuss the results. Data from the 2015 experiments will be used to produce a full report and online training course for the fire service.

The burn experiments were part of ongoing explorations by FSRI on the use of ventilation techniques to control fires. Two previous DHS-funded studies studying fire ventilation techniques were 2010’s “Impact of Ventilation on Fire Behavior in Legacy and Contemporary Residential Construction” and 2013’s “Study of the Effectiveness of Fire Service Vertical Ventilation and Suppression Tactics in Single Family Homes.”

Though this is FSRI’s first study of the use of PPV, the research builds on a National Institute of Standards and Technology (NIST) study of PPV use in high-rise buildings. In that 2006 study, researchers learned that positioning fans at certain places along high-rise stairwells helps control and contain smoke from a high-rise fire, hindering its progression into the stairwells. The report study concluded that proper use of fans increased the effectiveness of firefighters and the survivability of high-rise occupants. UL was one of many agencies and businesses devoted to fire safety that contributed to the NIST study.